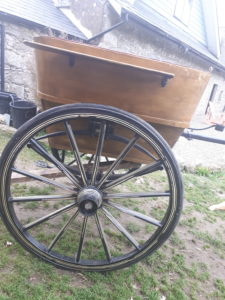 Take a carriage ride in our traditional Irish tub trap, made by Noble Bros., Coach & Motor Works, Clones, Co. Monaghan,  in the early 1900’s and you will be following in the footsteps of John Wayne and Maureen O’Hara in the famous Irish film, The Quiet Man on their epic journey to town in a tub trap

A tub trap is also known as a governess cart, so named because the governess could drive the horse while sitting with her charges in a safe enclosed space.   However, such a trap must be put to a very quiet horse (such as Beauty) because the driver must open the back door to get out and go to the horse’s head in case of emergency.

Noble Bros., Coach Builders,  Annalore St., are cited in the Belfast and Ulster Towns Directory 1910 for Clones and in Kellys Directory of Leather Trades in 1915.  Could our tub trap be from that era?  I would love to hear from anyone who might know.

I don’t know the full history of our tub trap but about 10 years ago the father of the previous owner saw a lady driving it to the shops in Maynooth and decided on a whim that he would like to do that, so he bought it.  But he never drove it.